Due in part to the upcoming presidential election, Americans are constantly surrounded by political ads on TV, on social media and in the news. Just how effective is political marketing, and do negative ads really work?

Signed up for newsletter: 6%

Donated money to cause: 5%

The most effective political ad platforms according to internet users(2)

Many voters openly reject attack ads on political candidates, and yet they are often emotionally affected by them. So at the subconscious level, perhaps negative ads are more effective than we think.

Political ads have slowly become more negative over the past four election cycles. (3)

63% of voters believe the following should be considered “out of bounds” in attack ads: (4)

A candidate’s lack of military service

The actions of a candidate’s family members

Past alcohol or drug abuse

Negative ads tend to encourage voters to seek out more information about candidates.

They also help sway the undecided voter toward the end of an election. 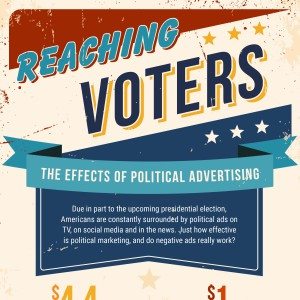