It isn’t easy to predict what marketing strategies will produce viral content. To be sure, we’ve seen some blundering attempts recently, but take heart: There are some consistent elements in successful campaigns that your brand can follow.

Marketing campaigns are expensive to conceptualize, create and implement. That’s why companies are so focused on making their efforts go viral. Here are some success stories:

Real(ly) beautiful: A 2013 campaign by Dove featured a police sketch artist listening to how women portray themselves and how another person describes them. The two images are then compared side-by-side, with the women’s “self-portraits” being far more critical and negative than the others. The ad has attracted more than 64 million views on YouTube. (1)

On-demand: More than a decade after “The Blair Witch Project” and its viral-before-viral-was-a-thing campaign, the producers of “Paranormal Activity,” who made their 2007 film for about $15,000, invited those interested in the film to demand their local theaters show the movie. The result? A wide, nationwide release and more than $107 million in box office revenue in the U.S. alone. (2, 3)

Muscled out: Volvo’s successful “Volvo Trucks” stunt series in 2013 featured Jean-Claude Van Damme, who performed an unbelievable stunt between two moving trucks. The spot blew up, being shared all over social media and drawing more than 73 million YouTube views to date. It also spawned a heavily shared parody by actor Channing Tatum. (1)

What Not to Do

All press is good press? Not really. These five poorly considered ideas did more harm than good.

Crowd control: LG’s South Korean promotion of the G2 smartphone in 2013 took a violent turn when a balloon release (the balloons had vouchers for free phones) drew dozens of people toting BB guns and other weapons. About 20 people were injured, and LG canceled all other promotional events in the country. (4)

Will tweet for food: A 2013 campaign by Kellogg’s in the UK drew appropriate criticism for this post: “1RT=1 breakfast for a vulnerable child” as part of a Give a Child a Breakfast campaign. So if the message isn’t tweeted enough, the kids will starve? (1)

Deadly serious? R&B singer Ashanti’s 2008 album promotion saw dozens of emails sent out telling the recipients that their lives were in danger. The publicity stunt was aimed at helping the singer boost her record sales (note: it didn’t work). (5)

Some things aren’t funny: A 2013 UK ad for Hyundai used a failed suicide as a punchline (oh, haha, this guy wants to use his car’s emissions to kill himself, but the car is too efficient). A negative reaction ensued, including an open letter from a blogger who posted the suicide note of her father, who killed himself in the same manner attempted in the ad. (6)

Never forget (AT&T): With companies in every corner of the U.S. making their own 9/11 tributes every year for more than a decade, you’d think this would be old hat to companies by now. In 2013, AT&T tweeted the words “Never Forget” with an image of the beacons of the World Trade Center Memorial … taken with an AT&T smartphone. (6)

While much of what becomes viral is a blend of luck and timing, there are clearly some best practices (and ideas to avoid) for your brand. (7, 8, 9) 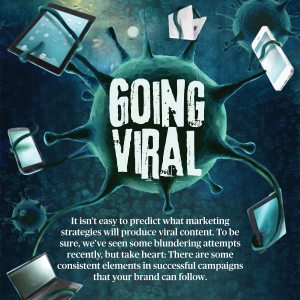